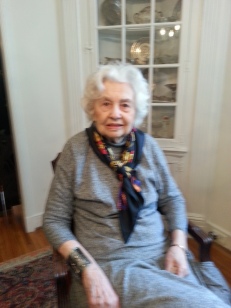 Debbie Baruch Abrams, 92, a resident of Georgetown, S.C. and cousin of Bernard M. Baruch, political advisor to several U.S. presidents and former owner of Hobcaw Barony. This photo was taken during our initial visit with her at her home in Georgetown, S.C., October 17, 2014.

Reprinted below is an article published in the Coastal Observer (Pawley’s Island, S.C.) about Mrs. Abrams’ visit and our project.  The Between the Waters team thanks Lee Brockington and the Hobcaw Barony staff for their assistance in making this day possible.  We are also grateful to the Coastal Observer for covering the event.  Lastly, we would like to thank Debbie and Marilyn for sharing this special occasion with us. 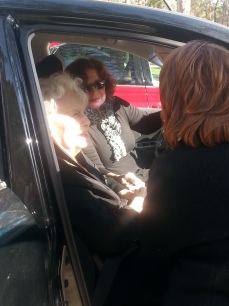 Debbie Baruch Abrams sat in her cousin Bernard’s house last week and talked about the family’s gatherings at Hobcaw Barony for a recording crew from South Carolina Educational Television.

The video will be part of an interactive website called Between the Waters.  ETV received a National Endowment for the Humanities grant for nearly $300,000 to build a website exploring the history, nature and culture of Hobcaw Barony that is due to be finished in 2016.Abrams, 92, said her grandfather and Bernard Baruch’s father, Simon, were brothers, and her grandmother and Baruch’s mother were first cousins.  She was born in Camden and moved to Georgetown after she married Helmar Abrams, a druggist.  She taught school and remembered having Doc Lachicotte as a student.

Abrams’ interview and another planned with Robert McClary, a former resident of Friendfield Village in Feburary, will be combined with the ETV documentary, “The Baruchs of Hobcaw.” It consists of old and new photos, film and sound recordings, maps, art and video on the website.  Visitors to Hobcaw will be able to download an iPad app in the future and listen to the interviews as they walk around the property, he said. 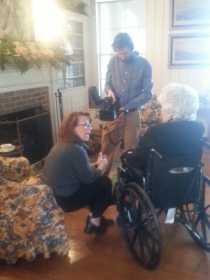 Jackson said Abrams was able to remember more details of the Baruchs once inside Hobcaw House.  “It’s becoming increasingly uncommon to find someone who has an intimate connection to the space,” a spokesperson said.  “It’s just a joy to have her back.”

Abrams, who was accompanied by her daughter Marilyn Friedman, did not spend much time with Belle Baruch but remembered her for helping Frances Milam, a young Georgetown girl who suffered from infantile paralysis.

“Belle was a lovely person,” Abrams said, “and did a lot of good that people didn’t know about. She was never advertising what she did.  Belle saw that the child had everything that she needed until she died. Belle was very conscious to do what she could for people.”

Belle Baruch invited Frances to swim in the pool at Bellefield and had a concrete sidewalk poured so she could maneuver her wheelchair in and out of her parents’ house in Georgetown, according to Hobcaw’s senior interpreter Lee Brockington. 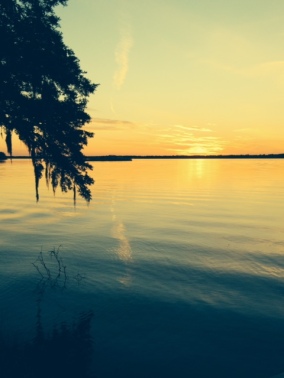 This photo was taken by Marilyn Friedman, daughter of Debbie Baruch Abrams, prior to their departure.  The Between the Waters team would like to thank them for participating in this special event. 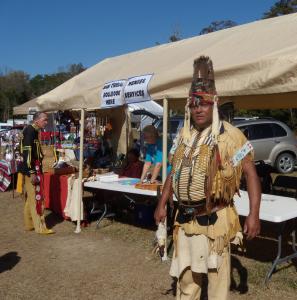 Harold “Buster” Hatcher, Chief of the Waccamaw Indian People, poses for a picture during the group’s annual Pauwau held on its tribal grounds in Aynor, S.C. Photograph courtesy of http://www.americantowns.com. Accessed November 10, 2014.

Warning: Contains strong language that may not be suitable for younger listeners.  Discretion is advised.

SCETV’s Between the Waters Project

SCETV’s Between the Waters Project